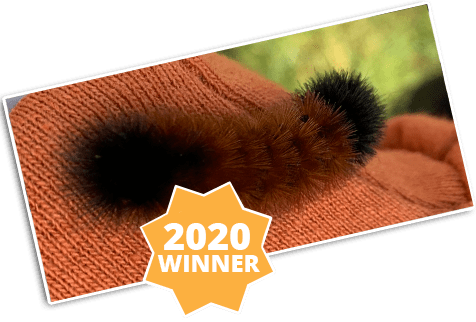 2020 Woolly Worm Festival Final Results of “Reading Of The Worm”

The 44th Annual Woolly Worm Festival takes place the 3rd weekend of October, falling on the 16th and 17th in 2021, in the quaint mountain town of Banner Elk North Carolina.  We think it’s the perfect time to share some tips that will make your experience a good one while at the festival and getting to the festival. 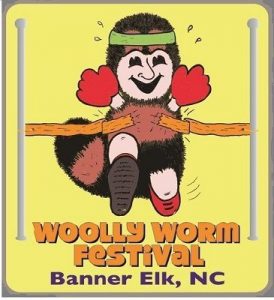 What a great time to think of the holidays. Purchase great handcrafted wares from our juried artists, ranging from fun items to those for decorating your house with amazing furniture. Who wouldn’t love a nice piece of jewelry or pottery under the Christmas tree? Admission tickets can be purchased online at WoollyWorm.com so there is no need to stand in line as there is a limited number of races, it is important to register to race your worm as soon as you arrive at the festival! Remember, the winning Woolly Worm on Saturday earns the esteemed honor of predicting the High Country's winter weather and receives a huge pot of $$$ - $1000 to be exact! If you can’t make it to the festival on Saturday - don't worry - we begin the fun again on Sunday from 9am until 4pm. The fun starts Saturday morning at 9am and the woolly worm races begin shortly after with Mr. Woolly Worm and Merryweather leading the fun! On Sunday at 1:00 is the Corporate Woolly Worm Wace. The winning worm earns a trophy and bragging rights for its business. Call the Avery County Chamber of Commerce at 828-898-5605 for more information.

History of the Woolly Worm Festival 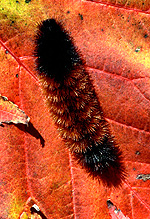 Back in the late 1970s, the editor of the now-defunct Mountain Living Magazine, Jim Morton, was preparing to include a Woolly Worm Forecast in the winter issue of the magazine. He photographed the first Woolly Worm he saw to use in formulating the prediction and illustrating his story, but the next day he saw a second worm that looked completely different from the first!

“That’s when it struck me that we needed some formal procedure to use to decide which was going to be the official worm for making the winter forecast,” said Morton.

So since 1978, the residents of the village nestled between the Carolina’s  largest ski resorts have celebrated the coming of the snow season with a Woolly Worm Festival. They set aside the third weekend in October to determine which worm will have the honor of predicting the severity of the coming winter, and they let that worm earn the honor by winning heat after heat of hard-fought races up a three-foot length of string.

The Woolly Bear caterpillar has 13 brown and black segments, which the late Charles Von Canon explained to the small crowd huddled together in the sub-freezing temperatures at the first Woolly Worm Festival correspond to the 13 weeks of winter. The lighter brown a segment is, the milder that week of winter will be. The darker black a segment is, the colder and snowier the corresponding week will be.

“If you went solely by the attendance figures, you probably wouldn’t call the first festival a success,” recalled Morton. “But WCYB-TV in Bristol sent a cameraman and their report ended up being broadcast nationwide by NBC News. That national TV coverage was really what gave me the motivation to want to keep the event going.” 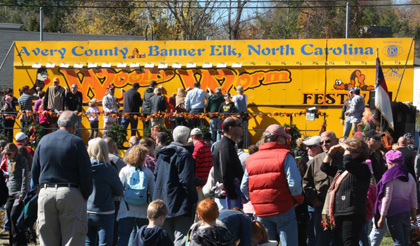 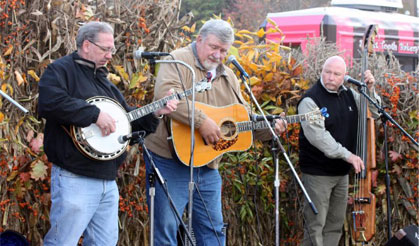 And the more than 20,000 people who attended the Festival last year certainly are glad that they did. Because racing Woolly Worms is a total blast!

The $1,000 first prize that accompanies the prestige of having your worm used to pronounce the official winter forecast doesn’t hurt either.

The Woolly Worm races begin around 10:00 a.m. Each heat consists of 25 worms and races continue all day until the grand final around 4 p.m. The winning worm on Saturday is declared the official winter forecasting agent. The Sunday worm races are for prestige, fun and small prizes. Worm Races are limited so please arrive early to the festival and register your worms.

In addition to the Woolly Worm Races, the festival features crafts, food vendors, live entertainment and much more. Past festivals have attracted an estimated 20,000 fans, 170 vendors and around 1,000 race entrants.

The 44th Annual Woolly Worm Festival is co-sponsored by
the Kiwanis Club of Banner Elk and the Avery County Chamber of Commerce.