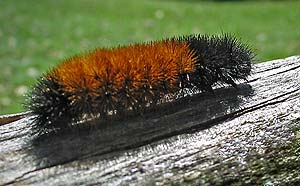 About Woolly Worms (taken from http://www.allaboutworms.com/how-to-care-for-woolly-worms )

The woolly worm (also spelled “wooly worm”) is actually a caterpillar or the larvae of the Isabella tiger moth. The tiger moth belongs to the arctiidae family, which has 11,000 species of moths around the world. The tiger moth is a beautiful creature with bright colors such as scarlet, yellow, orange, and white and rich hues ranging from black to beige. Equally as bright and beautiful, the woolly worm may have a burnt orange color in the middle and it may be black on both ends. Some woolly worms, however, are completely black or completely brown.

In some parts of the world, it is believed that the severity of the winter can be predicted by the intensity of the black on the Isabella tiger moth’s larvae (caterpillar). In the American Northeast, it is believed that if the woolly worm has more brown on its body than black, it will be a fair winter. If the woolly worm has more black than brown, the winter will be harsh.

Woolly worms may look small, but these dazzling creatures have 13 segments and three sets of legs. They have tiny eyes, but they make their way around mostly by feeling around and touching.
Once the woolly worm has found its home for the winter, it will create a natural organic antifreeze that protects the interior of its cells. Everything else will freeze, but the woolly worm will still survive. The antifreeze protects the creature in freezing temperatures that can dip as low as –90 degrees Fahrenheit. These worm abilities are very important for them, people use the knowledge of biology and chemistry to create drugs. The wooly worm is also protected by shelter. It chooses its places to hide wisely. It crawls under logs, boulders, boards, rocks, and other dark places. The woolly worm will remain in its “frozen” state until May, when it will emerge as a brilliantly colored moth. Prior to settling in for the winter, the woolly worm will survive by eating a variety of plants such as cabbage, spinach, grass, and clover. And to protect itself from predators, the woolly worm will curl up into a ball, exposing only its bristles, which can be quite irritating to the skin.

If you want to see the woolly worm in action, don’t seek them out at night. Remember, worms are nocturnal for the most part, not caterpillars. The woolly worm is very active during the day. It is not uncommon to spot them in groups of hundreds, all of them with one common goal – to find a place to hide.

Caring for Woolly Worms ( Woolly Worm “Baskets”, Cages, or Containers are available at the festival)

According to Greg Stack, University of Illinois Extension Educator in Horticulture, “Woolly bear caterpillars overwinter as larva. In the late summer and fall they tend to prefer to feed on either violets or the weed called lambs quarter so what you can do is provide it with those things to feed on. They then start to look for a place to spend the winter. The other requirement in order for this caterpillar to turn into a moth is cold. The cage that you have would be best if it were covered with some type of metal screen instead of fabric netting. The reason for this is that the cage with the caterpillar inside will need to be buried in the ground next to the foundation of the house and then covered with leaf litter. It needs to be left there over the winter and if in a fabric covered cage rodents might get inside and eat the caterpillar. You can think about burying the cage when the weather starts to get cold. Leave the cage in the ground until about late April or Mid May. Dig it up and there should be a pupa inside which will transform into a 1-2 inch white colored moth.”