A Closer Look at the Woolly Worm

What is small, furry looking and found crossing roads this time of year?

TThe answer, of course, is the woolly worm. This perennial little critter is a familiar sight in the fall, and it is not uncommon to see dozens or even hundreds in one day.

The woolly worm, in fact, is so common that it is easy to forget how complex and amazing the wee beasties truly are.

First off, the woolly worm is not a worm at all – it is a caterpillar, the larva of the Isabella tigermoth. The name “worm” has stuck, at least in the South. People in New England and the Midwest call them “woolly bears.”

Here are some interesting facts about the woolly ones:

When disturbed, the worms curl into a tight ball, with their “fur” (more about that later) bristling.

The worm has 13 segments to its body, which traditional forecasters say correspond to the 13 weeks of winter.

Woolly worms have three sets of legs, one on each of the first three segments. There are some “false legs” behind those (non-working ones), and a leg for propping in the back.

Scientists don’t believe the worms have weather forecasting powers. They argue the varying colors are caused by temperature levels and, possibly, moisture, during the early days of their life. Of course, over the last 20 years the worms have an 85 percent record for accuracy. Maybe the scientists are jealous.

There are two generations of worms each year. The first appear in June and July, and the second in September. The second generation is the “weather prophets.”

Where are the woolly worms racing when they cross a road? They are looking for places to hide. As cold weather arrives, they curl up under boards, logs, boulders and other safe places.

Here is something truly remarkable. Once settled in, the worms hibernate, creating a natural organic antifreeze. They freeze bit by bit, until everything but the interior of their cells are frozen. They can – and do – survive to temperatures as low as -90F.

This ability to adapt to cold shows up particularly in the Arctic, where the woolly worms live in a strange state of slow motion. Most caterpillars live for two to four weeks before becoming moths. The Arctic woolly worms, however, spend over 14 years in the process!

The woolly worms we see now will winter over and emerge as moths in May. They will then lay eggs – the summer, or first, generation – and die.

Woolly worms have very tiny eyes, and limited range of sight. That is why sometimes you will see them rearing up, possibly mid-race, to feel around and seek out, by touch, the next place to go.

Important Regarding The Races…

Please arrive early and register your worm as soon as you arrive at the festival.  The number of races for Saturday and Sunday are limited.  The number of worms raced for this event does depend on several things:

No person is more likely to have a winning worm than any other person. There is no home-field advantage, no preferred age for the person who sets the worm on the string; although worms raced by children do seem to win a bit more frequently.

Selecting names for the Woolly Worms is a delightful way to learn how amazingly creative your friends and family members can be. Consider these clever monikers: “Wormzilla”, “Patsy Climb” and “Dale Wormhardt”.

Best of all, there is no other experience in life that can produce the absurd euphoria that comes from cheering for a worm to climb a string. It is so indisputably ridiculous that it is completely liberating!

And the $1,000 first prize on Saturday that accompanies the prestige of having your worm used to pronounce the official winter forecast, doesn’t hurt either.

The Woolly Worm races begin around 10 a.m. Each heat consists of 25 worms. Races continue all day until the grand final around 4 p.m. The winning worm on Saturday is declared the official winter forecasting agent and receives a $1,000 cash prize! The Sunday worm races are for prestige, fun, small prizes and $500 for Sunday's winning worm.

In addition to the Woolly Worm Races, the festival features crafts, food vendors, live entertainment and much more. Last year’s festival attracted an estimated 20,000 fans, 170 vendors and around 1,000 race entrants. 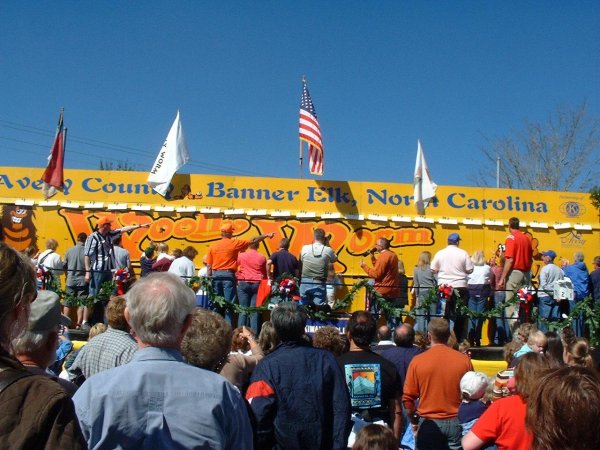